Review: God is a Gamer

I had always been a fan of thrillers but somehow I'd this idea that Ravi Subramanian wrote a lot involving banking-which given the fact that my father is a banker & loved his books-would be boring.

How wrong I was!

I was lucky to start off with God is a Gamer as my first book by the author. And although it did involve banking & some pretty mundane financial stuffs, the core plot revolving around bitcoins was what kept me hooked.

God is a Gamer is an intriguing tale that begins with a meeting. Joseph Saunders the CEO of Visa International & Vijay Banga President of MasterCard International meet up with a US Senator Gillian Tan to discuss about an initiative that Russia may soon take which would cost the credit card industry a lot of their revenue. Soon after the famous WikiLeaks incident occurs, shaking the US government & forcing all international banks to withhold WikiLeaks' finances.
Enter Bitcoins.

Bitcoin is a form of virtual money that allows purchase over internet, ease of access & transfer without involving any financial institution. So that's naturally bad news for some people.

And what's a thriller without a murder? Gillian Tan is assassinated & that gets the FBI involved.

We cut to India where Swami the head of retail banking at the New York International Bank is in not so good terms with Malvika the CEO. And the current phishing scam that dupes customers & steals their account details, is not making things any better. At times of difficulty he only has his trusted friend Aditya to rely on for support & advice. Aditya was himself a legend in banking but he'd quit all that to start his own BPO eTios & also owns Indiascape-a gaming company. Together with his right hand man Sundeep he had managed to set up a profitable business & a good reputation.

Things get nasty when that very reputation is at risk & all that Aditya believed in and worked for seems to come crashing down.
I won't reveal any more of the plot, firstly because it's too complicated anyway and secondly, you'd not want to miss reading this thriller right?!

The characters are well-developed. There is a bit of a lag in the narration that should be avoided since this book claims to be a thriller. But I loved the short & crisp chapters. The flow was good, not confusing the reader as we made the transition from US to India, from FBI to CBI.

I found the ending a bit predictable. An observant reader would come up some answers in the later chapters. Nevertheless there are twists & turns that are quite a surprise and ensures that the reader never puts the book down.

A lay man who has limited knowledge of the know-hows of banking and is not a technology-geek may take some time to keep up with the author. Other than that I found this book a good read & would gladly give it a rating of 4/5.

Unknown said…
Yea ..Great book , It's all money over matters becoming mind over matters ...but the thriller stuff without murder was quite creative out there...A CEO becomes a gamer he is too competitive , when CEO becomes creative he is godly....The books name should have been The CEO games , I would have probably never read it...4.5 rating by you , seems like get to get this book and read ..
December 4, 2014 at 4:11 PM

Popular posts from this blog

This post has been published by me as a part of the Blog-a-Ton 31; the thirty-first edition of the online marathon of Bloggers; where we decide and we write. To be part of the next edition, visit and start following Blog-a-Ton. The theme for the month is 'Strangers in the Night'
He didn’t like Romeo at all. Not one bit. The bushy tail or the ever alert ears & warm brown eyes, failed to leave an impression on him. The 20” tall German Shepherd too, didn’t have any affection for him since the day 5 yr old Ryan had tried to use him as a horse. I mean, won’t it hurt your ego if anyone were to mistake you for a Bubalusbubalis?
Romeo belonged to Ryan’s grandfather, now retired & enjoying his lazy days in the wonderful village of Chharabra in Shimla. With wildlife aplenty, having a faithful dog around wasn’t a bad idea, he’d thought when he bought Romeo from a pet shop. Every summer Ryan would visit his Grandpa & after the first rendezvous with Romeo, he preferred to spend…
Cont....

This post has been published by me as a part of the Blog-a-Ton 14; the fourteenth edition of the online marathon of Bloggers; where we decide and we write. To be part of the next edition, visit and start following Blog-a-Ton.
The sky I look up to is overcast,
Orange fumes rising from the blast,
Grey clouds mock & drift away,
Only the pain is here to stay

Saffron the colour of sacrifice,
Now adorns the messengers of malice,
The Blue wheel rotates once in 5 years,
Unending lies, masks & the same tears,

Prosperity reflected by the humble Green,
Is twisted to portray monetary means.
The White sits silent and bleeds for me, Ruthlessly butchered by the powers that be.
Amidst this pain and macabre view,
I sense a turmoil & a rising long overdue,
The sky will clear & I’ll no longer burn,
Deep inside I know my colours will return…
The fellow Blog-a-Tonics who took part in this Blog-a-Ton and links to their respective posts can be checked here. To be part of the next edition, visit and start…
Cont....

Getting A Schengen Visa When Travelling Solo 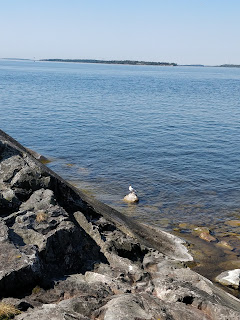 The last couple of months had been excruciating for me. The virtue of patience has been ever elusive in my case & this time the wait was even more painful. In order not to let anyone go through the same torture, I have decided to share a few pointers into getting a tourist visa in you're planning a trip to Europe.
My case was-boyfriend on site at Helsinki invites me to come spend my birthday with him there. The catch being, he cannot really send me an invitation letter due to company restrictions.

After spending a good amount of time on the internet I finally applied for the Schengen tourist visa on 4th of April, for travel dates on 16th of May. Guess when my visa arrived? 14th May!!!

Hence the first rule apply well ahead in time, especially during summer. Summer sees a lot of tourist visa applications along with a ton of student immigration cases which makes the processing time at the Embassy longer than usual. Although in situations where you have an invitation letter of so…
Cont....