The Snake Charmer of India

December 27, 2015
His eyes darted across the room. The panoramic view of drunken mass irked him. Bodies subtly and more often  coarsely rubbing against each other evoking disgust rather than sensuality. The singer at the bar was religiously murdering a popular Coldplay song. To top it up, Happy Hours had ended...and not just at the bar.

He was bored. He'd come here to meet his girlfriend...now ex-girlfriend. She didn't want to though. Said some crap about having adapted to this country, this city and even more bullshit about finding peace in Delhi's chaos. Like girl what the fuck! Just tell me who are you fucking??!!
He slammed his bottle down a bit too hard at the counter,earning a glare from the bartender-who by the way didn't look a day older than 20.

Crazy stupid city...you need to be 25 to drink here and he was just 23 with only a few hundred Indian rupees left in his wallet. Good thing he passed for 25+ and no one gave a damn about IDs really. He was handsome and by now had gotten used to the ogling from men and women alike and the virtues of being a foreigner.
A few weirdos had even approached him,like girls approaching was welcome,but men? No thank you!

'This man singing Yellow... I'd gladly..slowly... rip his tongue out if given a chance'- a deep baritone interrupted his thoughts. The guy looked like he'd just returned from office,dressed in a casual maroon pullover and denims,his ID card still hanging around his neck, he stood there with a bottle of Heineken. 'You got a light bro?' 'Yeah...you got any cigarettes?' Luke replied. 'Sure...let's head out?' he tilted his head towards the smoking section.

It was November, winter was yet to make its presence known. The wind was comfortably cool, or it felt so after the stuffy indoors they'd been in. Both lit up the Marlboro he offered and watched as the smoke rose up in the air to disperse into oblivion. 'I'm Luke..' he extended his hand. He normally didn't do this. But he was already high today and ready to throw caution to the wind. 'Pratik..' the hands that held his were soft,almost feminine but for the grip.

'Praatik' Luke acknowledged. ' You work at an IT company?'
'Not too hard to guess is it?' Pratik smirked, playing with the ID card which bore the name of a well known software company, like it was a yo-yo. 'What about you?' 'A teacher. Or at least trying to be one. ' 'Impressive'

Silence fell, only between them mind you,for the ambience on the rooftop played a cacophony like before.

A cute little girl in a small red dress entered through the door by which they were standing. Her eyes scanned the area and it looked like she was searching for someone. Her gaze lingered a tad bit longer than necessary on Luke, who feeling high already smiled back. She seemed flustered and almost immediately beat a hasty retreat.

'She is here with a guy, so don't waste your time.' Pratik muttered. 'I wasn't!' Luke defended. 'It's okay dude. I was just trying to save you some trouble, you've no idea how Delhi guys are...'

'So...are you a programmer? Like do you use Java? I have taught basic Office operations at a community college back home...' he wanted to change the topic.

'I know what a snake charmer is, I just don't understand what do u mean by saying you're one?'

' I mean I play the flute and each time pretend I am hypnotizing the snake. The crowd cheers and I get paid. ..Look here,I'll show you a picture of typical urban snake charmer. ' Pratik whipped out his iPhone 5S and quickly hit the search. 'Notice the similarity? No matter which region he belongs to,what religion the snake charmer follows, they are dressed the same way. A turban,bright clothes,the tired fatigued look on their faces...we the urban snake charmers have only improvised a bit on the wardrobe. The turban gets replaced with a name tag and formal clothes. But we all are at the end of the day,snake charmers.'

'Praatik you seem high bro,go home...are you calling anyone to pick you up..?' Luke didn't want a drunkard spoiling his already rotten evening. 'I pretend I know Java, I pretend I know the heck is going on in my code. The code sometimes works,sometimes it doesn't. When it does work, I get an appreciation mail from the client-bravo Pratik, you have shown excellent skill in making the delivery a success. Remarkable work that should serve as a benchmark from now on...blah..blah..blaaaaah!!'
Pratik finished animatedly.

'And what happens when it doesn't work?' Luke humoured him.

'Then...I keep playing the flute,this way and that, to evoke that wretched code out of the box and make it dance to my tunes. If I don't,I get no incentive.No incentive, implies unhappy girlfriend...less booze and in short you're doomed!' he solemnly mused.

Luke left him alone and went back to refill his drink. What a funny guy that was. Snake charmer indeed. 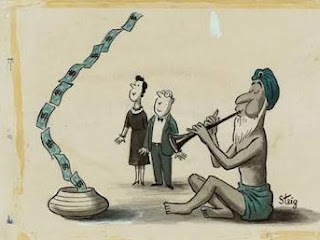 An hour later, he spotted Pratik leaving the pub...his hand pressed against the back of that cute little girl in red.

'Sometimes the snake charmer gets to become the crowd.' Luke chuckled to himself as he downed his last drink, ready to leave.

Popular posts from this blog

This post has been published by me as a part of the Blog-a-Ton 31; the thirty-first edition of the online marathon of Bloggers; where we decide and we write. To be part of the next edition, visit and start following Blog-a-Ton. The theme for the month is 'Strangers in the Night'
He didn’t like Romeo at all. Not one bit. The bushy tail or the ever alert ears & warm brown eyes, failed to leave an impression on him. The 20” tall German Shepherd too, didn’t have any affection for him since the day 5 yr old Ryan had tried to use him as a horse. I mean, won’t it hurt your ego if anyone were to mistake you for a Bubalusbubalis?
Romeo belonged to Ryan’s grandfather, now retired & enjoying his lazy days in the wonderful village of Chharabra in Shimla. With wildlife aplenty, having a faithful dog around wasn’t a bad idea, he’d thought when he bought Romeo from a pet shop. Every summer Ryan would visit his Grandpa & after the first rendezvous with Romeo, he preferred to spend…
Cont....

This post has been published by me as a part of the Blog-a-Ton 14; the fourteenth edition of the online marathon of Bloggers; where we decide and we write. To be part of the next edition, visit and start following Blog-a-Ton.
The sky I look up to is overcast,
Orange fumes rising from the blast,
Grey clouds mock & drift away,
Only the pain is here to stay

Saffron the colour of sacrifice,
Now adorns the messengers of malice,
The Blue wheel rotates once in 5 years,
Unending lies, masks & the same tears,

Prosperity reflected by the humble Green,
Is twisted to portray monetary means.
The White sits silent and bleeds for me, Ruthlessly butchered by the powers that be.
Amidst this pain and macabre view,
I sense a turmoil & a rising long overdue,
The sky will clear & I’ll no longer burn,
Deep inside I know my colours will return…
The fellow Blog-a-Tonics who took part in this Blog-a-Ton and links to their respective posts can be checked here. To be part of the next edition, visit and start…
Cont....

Thoughts On A Hot Summer Day

April 13, 2019
It was hot. And not just any normal level of hot that you've managed to believe it might have been. It was to put in prettier lexical terms - sweltering, decaying, broiling, and perspiring.And it was just April. May was yet to come.

As another ginormous vehicle sluggishly but deliberately cut in front, splashing precious water from an orifice located on top like a whale in the ocean, it was decided that a prodigious traffic jam was inevitable.

Dehydrated.
One more term to describe this April. It began slowly at first. The taps would start protesting by 9 am. An ominous cry would emanate from the other end, wailing into the bathroom, echoing off the walls in protest to being asked to procure something they no longer had. One does not accept defeat in such scenarios, The taps are twisted in clockwise and anti clockwise directions, pausing in between when fervent prayers are sent through the foamy deposit of lather on their face.

Dehydrated oddly meant that even stores ran out of be…
Cont....