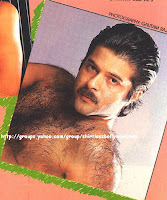 Facial & body hair look good, only on models of primitive men found in museums. However Indians always tend to differ. A man’s moustache is regarded as a proof of his manliness, lack of facial hair is a shameful attribute & all growing teenagers would agree. While the likes of Anil Kapoor are a rare extremity, having a stubble or the slight hint of a moustache is what men prefer & assume women like. Well not always!

Scene 1:
He draws in close with that warm look in his eyes that’d melt any heart. It sure melted hers. A second later:
She: eww.. *spitting out*
He: what’s wrong??
She: nothing…lets continue. You kiss me while I munch on your moustache.

Scene 2:
A lonely path in the park & he pulls her right up to him.
She: oww…
He: now what?! I did trim it you know?
She: yes & now it feels like am kissing a porcupine!

There are other scenarios too where the moustache and the beard pair to act as a mood killer, but I refrain from sharing them here, it’s not an adult blog.

Why don’t guys shave? Simple, ‘coz they hate being called cute. How many women can stop saying “awww you look so cute today!” when their guy appears clean shaven, smelling of cologne? Girls, he is your boyfriend not some teddy bear! The greatest insult a man feels is when he is called cute. It undermines his ego, makes him feel like a stuffed toy all girls would love to play with but not you-know…

So unless it’s your bro or your platonic friend refrain from using the term ‘cute’.

So how to get a guy to shave?

1.       Abolish cute introduce sexy. Make him feel he still looks desirable without that lump of hair sitting on his upper lip

3.       For Asian drama fans (girls who know what BBF stands for) never ever let him set his eyes on any of those actors. Yes we find them sexy, but trust me, men DO NOT!

4.       Ban kissing. Keep humouring him with pecks on the cheeks until he gets the point.

5.       If nothing else works….grow your moustache! Skip the parlour & let nature have her way on your face. The sight of overgrown eyebrows and upper lip hair is enough to scare any guy! And hey, you both could spend quality time shaving together!!!


This post is a part of the 'Shave or Crave' movement in association with BlogAdda.com
Email Post
Labels: fun opinion

Prateek Bagri said…
Keeping beard or only moustache a choice. Long gone are those days when facial hair signified of "muscularity". Now it is "what'd look good on me?"

Chiranjibi said…
its all about the situation..it changes the appearance. and one may look older by keeping beard.. in my view its completes the face. Looks good. commands attention too.. :)
January 2, 2013 at 12:30 AM

Unknown said…
woah :P is that so :D .. personally speaking Moustache irritates even me -_- I rather shave it n never lets it grow anyway :P n btw I don't mind being called cute :P makes me feel young :D
January 4, 2013 at 10:11 PM